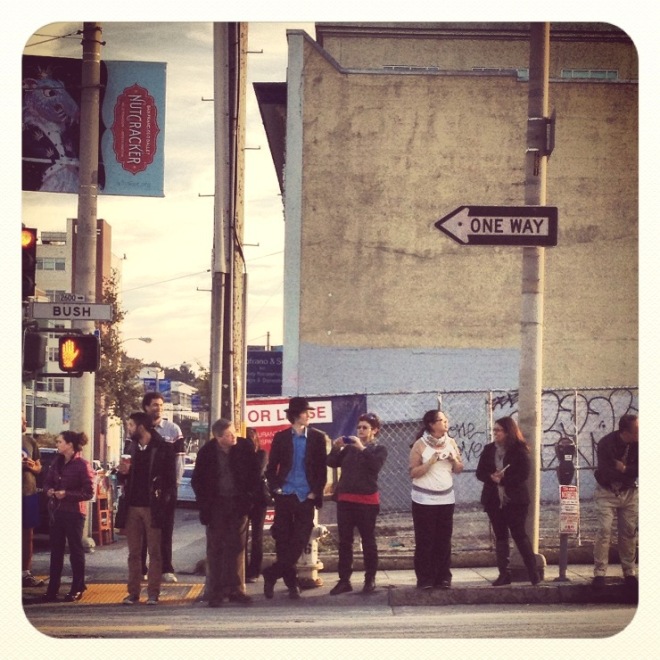 I was out running errands one afternoon and stopped on Divisadero to pick up the dry cleaning. As I got out of my car, I saw the street in front of me was blocked by a motorcycle cop and bunch of people were lined up on the whole stretch of the street. They were waiting for President Obama’s motorcade to come through (which it did, about 10 minutes later).

On a side note, I leave for Michigan with the girls in three days. I really, really should be packing. Procrastinate much?

Here we are. The Readers Respond book group. It was founded in February of  2001 (by a member who moved away a couple years later). My first meeting was May, 2003 (we have records!), making me one of the group’s longest standing members. The book we read was Wicked: The Life and Times of the Wicked Witch of the West by Gregory Maguire (like I said, we have records).

Joining the group was a life-changer for me. I had just gotten out of a terrible relationship, was working for a horrible boss (I still run into people who, when I mention his name, give me a look like they just smelled something rotten) and was pretty much hating life. I’m a super shy person in new situations (INFJ in Meyers-Briggs speak), but out of desperation for something good and true, I decided to check out a book club I found online at SFStation.

Some excerpts from the ad:
“The host moderates the meeting, gives a biographical sketch of the author and prepares a delicious spread of snacks; the other participants bring wine and wisdom.”
“While discussions can be tangential, they are always lively!”
“Must commit to attending and participating at meetings the second Thursday (of the month)…”

Over the years, we’ve talked a lot about how we’ve managed to stay together for so long. We attribute much of it to our rules (if we have records, you know we have rules) and the fact that we actually uphold them. I think we’ve also just been really lucky (or perhaps serendipitous).

Another beautiful thing about this group is that no subject is off limits (yep, even that one). As a result, we’ve had many a “lively” discussion (as the ad promises) and much, much laughter. We’ve celebrated a multitude of milestones and have gotten each other through disappointments and heartbreak. When one of us moves away, as San Franciscans will often do (to the East Bay, to LA, to Oregon, to Australia, to travel the world), we continue to be in touch.

You would think with friendships like this, that a last meeting would leave me in a state of…well, a hot mess. However, much like my last band hurrah, my last book group was not an emotional affair. Sure, we talked about my move and celebrated with some of my absolute favorites – homemade pot stickers, champagne and coconut cupcakes. I was given presents (the book I’ve been wanting! and a trivet of the Golden Gate Bridge) as well as a lovely card. So what gives? Why no tears or gnashing of teeth?

I’m not really the type of person to bottle up feelings. Maybe because this move thing is so monumental, I’m doing that without recognizing it as such. Maybe it’s because I know I’m going to see everyone one more time next week at my going-away shindig. Maybe at said shindig, as I’m sitting at the bar with a drink in hand, I will finally collapse to the floor and “ugly cry” (as my sorority sister Jen would say) for hours on end.

Whatever may happen, I know that, much like finishing the end of a good book, when I turn the final page on my San Francisco life, I’ll have so much joy and fulfillment from the whole experience, any tears shed along the way will have been well worth the ride.

It’s exactly two miles from my house to Ocean Beach (my Strava app tells me so). Every weekend I make the short run, ending up at the north end of the Great Highway near the Cliff House (today I beat my record: 9-minute miles – hurray! A special thank-you to my running partners, stress and angst).

The wall, looking northwest to the Cliff House.

Ocean Beach is not initially beautiful. At least it wasn’t to me, the girl who grew up in Hawaii. There’s a huge, graffiti-covered (only on one side, thankfully) concrete wall that spans the entire length of the beach. It’s supposed to keep sand dunes from piling up on the Great Highway. Still, every summer the highway shuts down for the annual sand removal, a project that moves approximately 7,000 to 10,000 cubic yards of sand (source: SFGate). 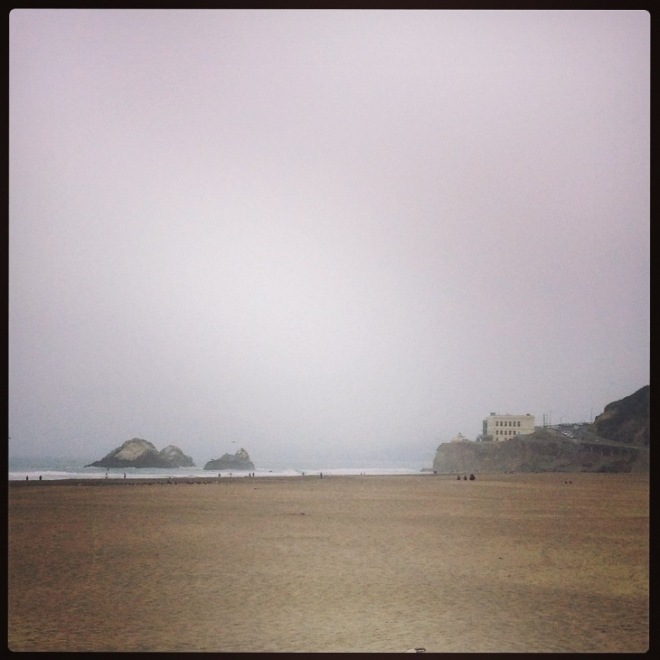 Another view of the Cliff House. 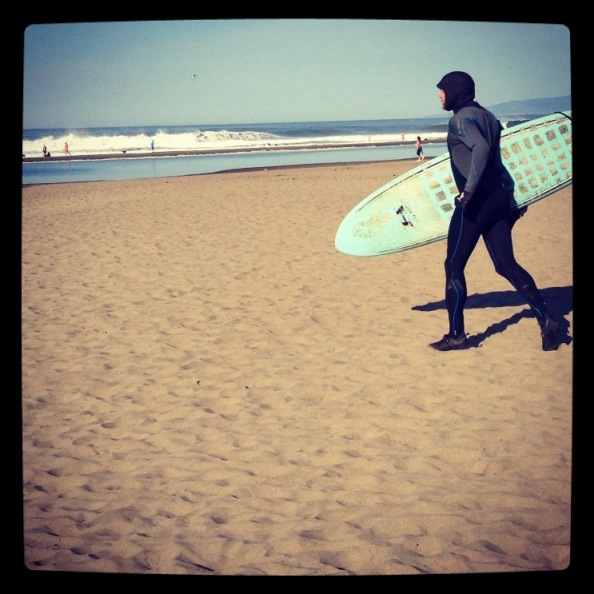 Even without the eyesore, there’s the weather. The beach is cloudy or foggy or cold or windy or all of the above 360 days of the year. But… like everything else in this town, it’s grown on me. I love how vast it feels, how uncrowded (when it’s a nice day, you know it. Everyone flocks to the beach), how rugged, even how grey (I mean, crashing waves at the edge of the world are pretty amazing, whether the sun is shining on them or not).

I’m beginning to think San Francisco can make anything beautiful. The old homeless man sitting on a park bench I passed this morning. The abandoned beer bottles I found last week. Maybe my stress level is so high that I’m not thinking clearly (I think I AM a tad delusional right now, let’s be honest). But I think more than that, I just want to love my town as much as I can in these last couple of weeks.

Inside one of the stairways on the Batteries to Bluffs trail.