In early Spring, we pulled up a bunch of bushes that were blocking the view from the kitchen window. We finally decided on a serviceberry tree (formal name, amelanchier) to help cover the utility boxes and make them less of a focal point.

Other options were some type of lattice covering (which I’ve never liked, at least not as a focal point) or an evergreen. An evergreen probably made a little more sense in terms of coverage, but we (meaning me, and my husband let me have the final say) really wanted a flowering tree.

Here are the guys unloading the tree. ..

…and putting it into place.

Initially the tree was slightly crooked, so someone came back a week later to straighten it. Two weeks later (today), the tree looks a tad unhappy, with yellowed leaves, many of which have fallen off. One of the landscape owners came by to look at it and assured me it still looks healthy, and that it’s trying to adjust to its new environment. We do have a one-year warranty on the $400 tree, but we would like for it to survive, of course. 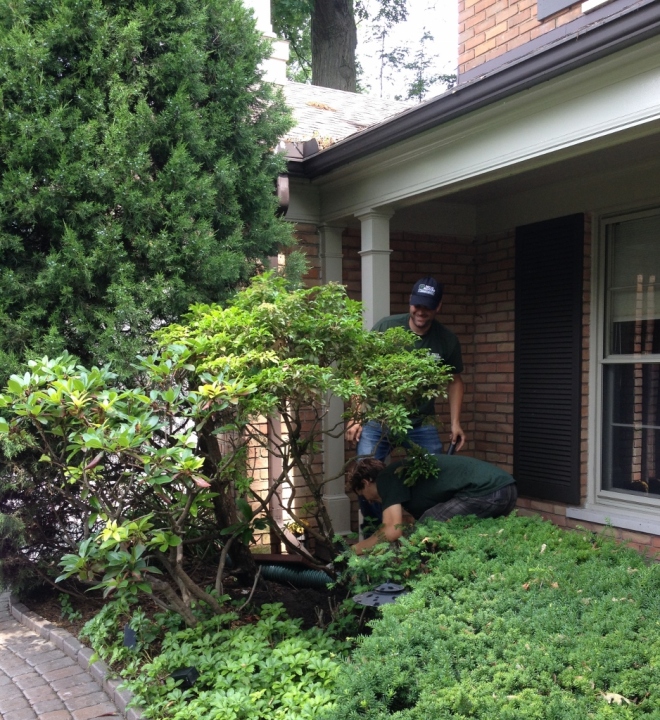 While the guys were here installing the tree, they also transplanted one of our Pieirs japonica trees free of charge. I felt the plant was competing with the rhododendron for sun and space, and I also wanted a plant with more foliage that would cover the drain pipe when looking out from the dining room.

I bought a $50 hydrangea with light purple flowers (the flower in the photo is faded after weeks of being in bloom) and planted it in the pieirs japonica’s spot. Hydrangeas love water and do well in the shade, so I’m told. This plant should grow to about three feet high and five feet wide.

It’s hard to see in photos, but the Pieirs japonica was moved next to another shorter Pieirs (on the left), that seems to be doing well even in a shadier spot. I’ve been told by several plant people that it’s an old plant, so it is especially vulnerable to being transplanted, but it seems to be doing fine in its new space. I lopped a few hanging branches of the evergreen overhead to give it more sun.

The serviceberry is supposed to produce actual berries in the spring. One of the landscapers told me (after I asked) that the berries aren’t edible (he seemed uncertain), but Mil the gardener says that they are and I’ve found several online sources agreeing with her. I also read that birds often devour the berries as soon as they are ripe, and there are a lot of them around here. Hopefully our tree will survive winter and I will be writing about its beautiful red berries next spring.

7 thoughts on “A New Tree and a Transplant”