1)  July was a quintessential summer month. The 4th was spent at my husband’s Uncle’s house, with family, swimming and hamburgers and hot dogs on the grill. If I had been more ambitious, I could have made the day even more ideal with a homemade apple pie. But I brought store-bought guacamole instead because sometimes momma just can’t.

2)  Speaking of holidays, there’s one house along Lakeshore Drive that goes all out in the decorating department. Christmas, is of course the big one, but the 4th of July display was definitely impressive (for lack of a better word). The girls call it “the silly house” or sometimes “the crazy house. Indeed.

3)  I’ve been dying to go to Chartreuse,  a new restaurant near the Detroit Institute of Arts, since it opened in late spring. My husband and I made it down a few weeks ago and we were not disappointed. It was on par with our favorite San Francisco restaurants, which speaks volumes, if you know San Francisco. Or me.

From appetizers to desserts, everything was fresh and flavorful and the portion sizes were not too small or too big, something that a lot of places don’t get right. Can’t wait to go back. 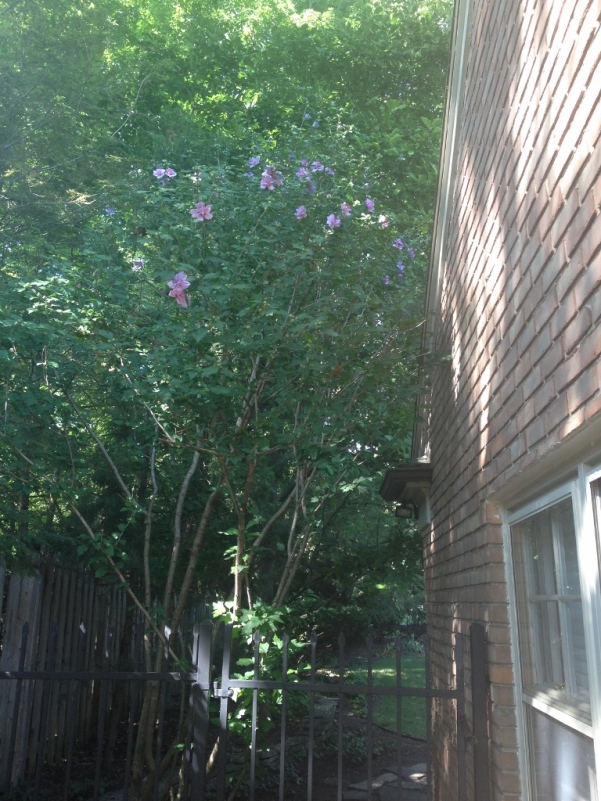 4)  Our Rose of Sharon is in bloom! It has beautiful lavender flowers (which was a fun surprise – we didn’t know what color they were since we moved in after they had bloomed last year) and is doing well considering its shady location.

However, since it is in a shady spot, it has grown SO tall in its attempts to get sun. So the only way to really see the flowers is from one of the bedrooms upstairs or by standing in the driveway. Might need to remedy that at some point. How, I’m not sure yet. 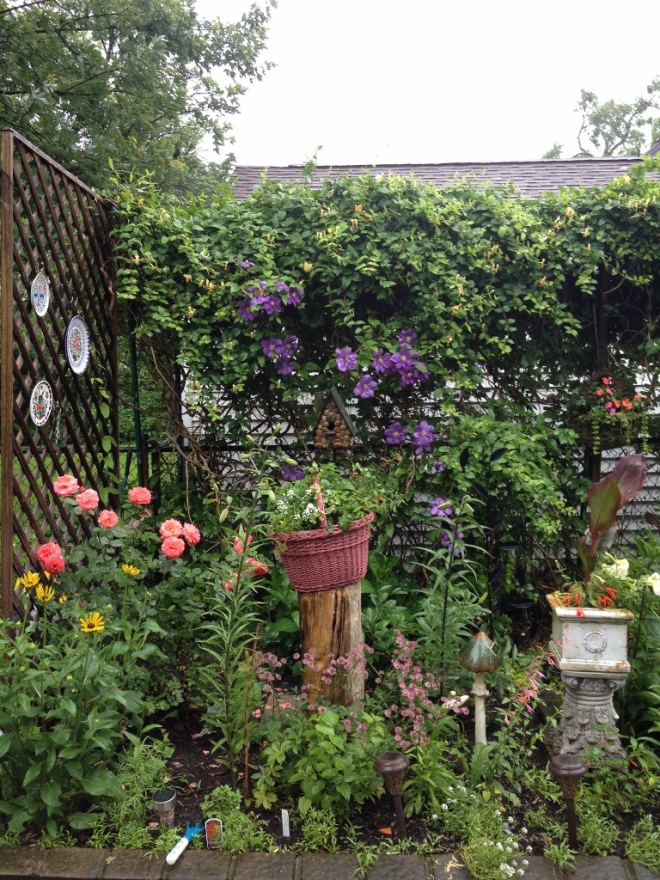 5)  Because I’m a gardener now (HA-ha) and because Shirley told me to, I went to the annual (24th) Grosse Pointe Garden Tour. There were six gardens on the tour and I made it to five. My Dad’s and his wife Lyn were visiting at the time, so she and the girls came along on Friday for three and I went solo the following morning in a nasty rainstorm to see two more (I’m so hardcore).

It was nice to see different aesthetics,which ranged from simple to eclectic, manicured to wild. Like going to a museum, it was inspiring to see these gardens and they gave me some ideas as to how I might want ours to look someday.

6)  At the Garden Tour shop, Lyn bought us this cool strawberry plant (potted by Shirley – she’d put together dozens of potted plants for the Tour, including a couple Crocs as planters, which were very cute).

We’ve gotten a few strawberries, but I have to fight the squirrels and birds for them. I ran out of the house one day, shaking my finger and yelling at a little black squirrel who had just scampered up the maple tree with a strawberry. He tsk-tsked back at me with his beady eyes. The struggle is real.

7)  I wrote a letter to the Board at the Yacht Club, asking (begging?) them to please plan for a recycling program. The containers you see above (and no, I do not always eat like this. Usually I also get a side of onion rings and finish the little ones chicken tenders.)… that’s what food is served in when you eat outside (not just take-out. And the Styrofoam! I can barely stand to look at it).

Hundreds of these containers get thrown in the trash daily during warm-weather months. The way I see it (thank you, San Francisco) not recycling is pretty much littering. I have yet to hear back.

8)  My girlfriend Sara from SF (now living in Ireland) came for a quick visit! I took her to Sister Pie, a favorite spot. Although not a favorite because of the pie.

I know, I know! You love the pie. I don’t love the pie. I’ve tried to love the pie. What can I say. Either I’m wrong (which doesn’t seem possible because I feel like I know pie?) or my pie taste buds are out of whack. Either way, I do love the cookies and this time I tried a coconut lemon, thyme mint, ginger and shortbread. All yum.

9)  There are tiny little weeds like this one all over our yard (not bigger than an inch or two). I usually give a pull and that’s the end of it. Sometimes I need the help of a shovel. One day, I decided to figure out where this weed was coming from exactly – how far its roots went and all that. After 30 minutes of ripping up a big section of the garden, I had a bucket full of roots and still did not get it all. Maddening.

10)  Most valuable gardening lesson I have learned thus far: when pulling a particularly stubborn weed, keep your eyes and mouth closed. Number of times I have regretted not following my own advice: too many to count.

11)  In the middle of a blah part of Detroit (gas stations, fast food restaurants, freeway on-ramps) near the Grosse Pointe City border, lies this pretty little farmhouse. I posted the pic to my Instagram account and people recognized it immediately. It definitely grabs your attention when you pass by. I’ve always wanted to snap a picture of it and got a chance one evening during a break in the rain. I wonder what its story is.

12)  I got out on the water for the first time last week on a friend’s boat. It was divine. Lake St. Clair is a beauty. I’ve said this before, but one of our criteria for moving was that we needed to be close to the ocean or other large body of water. In Hawaii, I was 20 minutes away from the beach. In California, five. Here, half a block. If we follow the natural progression of things, we will need to retire on a lake house. Not a bad prospect.

We have another month of summer, but I’m already seeing oak leaves on our lawn from our neighbor’s tree (nooooo!). We leave for a road trip to upstate New York next week, so the blog may be a little quiet in early August. I’m sure I will have a lot to share about our adventures.