July has come and gone in a flash. I’m still loving the heat, although I do wish it would rain every now and then for the plants. Midwestern summers are the best and I have zero complaints. I love sitting in the backyard as the sun goes down, and when it’s cool enough (and sometimes even when it isn’t), sitting by the fire pit with my husband after the girls go to bed.

1)  We spent the Fourth poolside with the family, but per usual, I didn’t get in the pool, which I won’t do unless it’s above 88 degrees (or thereabouts).

2)  When I was out jogging at the beginning of the month (not many jogging days for me this month – too hot), I passed three people I knew. Actually they passed me, as they were in their cars, driving. But they all waved or gave a honk. My husband does not love this aspect of small towns, but I do. 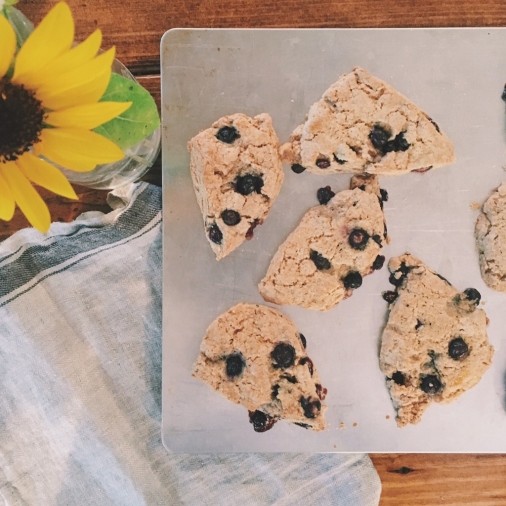 3) In my last post I talked about cooking. I’ve also been on a baking kick, which means we’ve had lots of scones this summer. Usually it’s blueberry, but I’ve also tried raspberry. My first batch of the summer came out picture-perfect, but most of the batch I made for the 4th of July party fell on the floor as I pulled it out from the oven. I was able to salvage a plateful, at least. 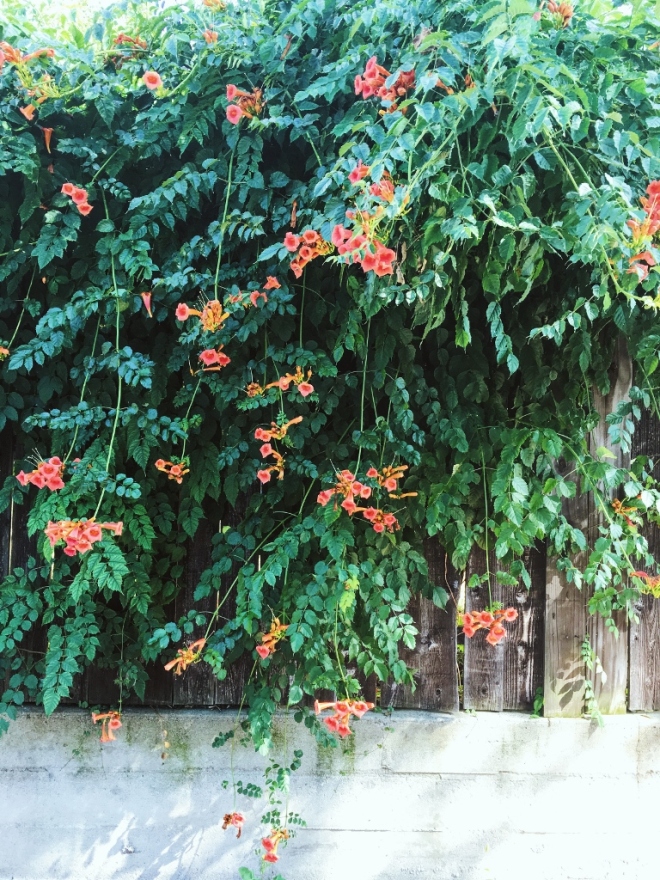 4) I’m still discovering new plants and this one growing on the side of a house in Grosse Pointe Park wowed me. One of my Instagram friends told me the name – trumpet vine – which makes complete sense, as you can see.

5)  The time I made a beautiful salad with greens from the garden and fresh (aka expensive) mozarella cheese, and sprinkled it with fish sauce instead of the balsamic glaze. That first bite was the worst. I was able to wash a lot of it off, but every few bites I’d get a taste of fishiness.

6)  Found this robin egg completely intact under one of the backyard hedges. Couldn’t tell where it fell from. Such a pretty blue.

7)  Our little 4 x 4 raised vegetable bed did pretty well! The peas were especially delicious, as was the lettuce and kale. It’s been somewhat neglected, as I’ve spent a lot of time at The Garden Detroit, but it has been a great experience in growing food. Both girls helped care for the plants, and tasted everything, even though they didn’t love all of it. Sam, as it turns out, loves peas. 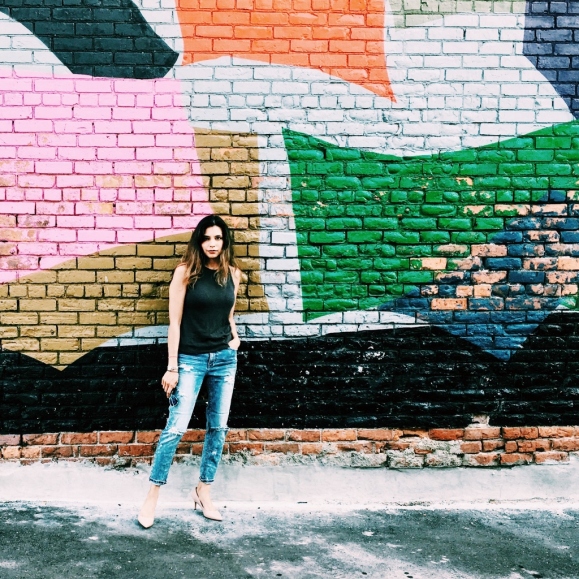 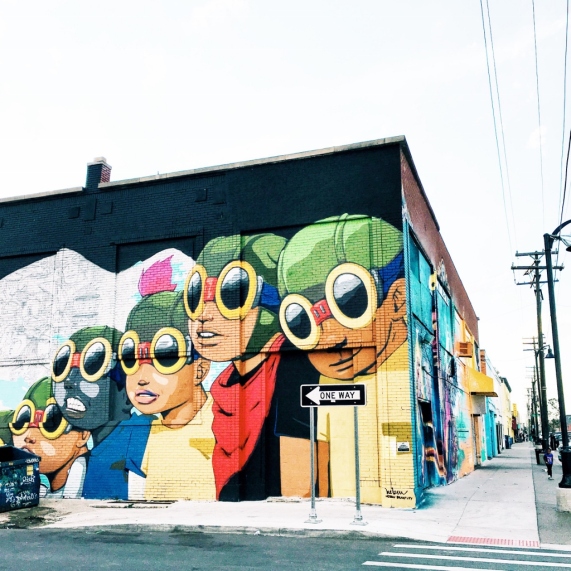 8)  My husband and I finally tried the new Eastern Market restaurant La Rondinella. The ambiance was nice and the food was great. Nothing exceptional, but we both enjoyed our meals. We took a short walk after dinner. It was nice to be there without the hustle and bustle of a market day, the only other times I’ve ever been.

We then drove to the Detroit Riverwalk, where we watched kids play in the fountains and people walk or ride by on bicycles. We had such a great time that we went back a couple days later with the girls.

9)  The Garden has a flower farm called Detroit Abloom. They have weekly CSA flower shares, which I subscribe to. They are always so beautiful and I love not knowing what I’m going to get from one week to the next. The cost comes out to $15.00 per week, which is a fabulous deal. And I’m supporting a local business, which we try to do as much as possible.

10)  I took the girls to a new-ish spot in Grosse Pointe Park, Sweeties, for ice cream. They also have jars of candy for sale. My ice cream was vegan – made with coconut milk – and way too sweet for me, but the girls’ flavors were yummy.

11)  This is what our fridge has looked like this month, thanks to my work at the Garden and also our weekly CSA share. Although I must confess, I’m a little burnt out on leafy greens and went several days without any. I think I’m ready to get back on board. Especially after all the ice cream we’ve been eating (but it’s seriously been so hot!!! What else can you do?).

12)  And lastly, my @thegardendetroit Instagram account hit 1000! Super goofy, but it’s a big deal to me and I couldn’t be happier. Also found yesterday that someone from North Carolina, an Instagram follower and fellow farmer, would like to come by and see our gardens as one of his stops on an upcoming trip. That makes me so happy, too.

I hope your August is filled with many things that make you happy! Until next time.