If you’ve ever tried to open a coconut, you know it’s not an easy task. I remember when I first moved to San Francisco, I found a coconut in one of the small markets and was so excited that I bought it and took it home to eat.

After a couple tries with my chef knife and several more tries with a hammer, it did crack open, but when I finally managed to pick out all the shell from the meat, it was old, and kind of stale. Operation Open Coconut = Fail. Had this story taken place in Hawaii, the end result would have been completely different.

As it happens, our family spent the last 10 days visiting my family in Hawaii. We just got back yesterday and I am running on four hours of sleep (maybe) and the girls, who were miraculously able to sleep 10 hours straight last night, are going completely insanely bananas today of all days, please God make it stop. But I digress.

Growing up on Oahu, I had the luxury of eating fresh coconut all the time. Not only that, but I also had a Grandpa, Grandma, mom and auntie who would do all the work for me. #notspoiled

I’ve watched it go down millions of times, but it’s always good to get a refresher and during our recent trip, Auntie gathered us around and demonstrated the fine art of coconut cracking.

Before she got started, she recalled that Grandpa used to hold the coconut in one hand and whack it with a machete with the other hand, the way you take a nut out of an avocado. Oh my word. I remember his efficiency, but I don’t remember that specifically. Recommended for experienced coconut crackers only!

First, pick your coconuts. This is a key step. The best ones are somewhere between young and mature. How to know which is which? Zero idea. But who cares when you can just ask the man at Tamashiro Market to pick some out for you. Next, go outside. Could you do this in your kitchen? Sure, but why create extra work. Place the coconut on a newspaper for quick clean-up. 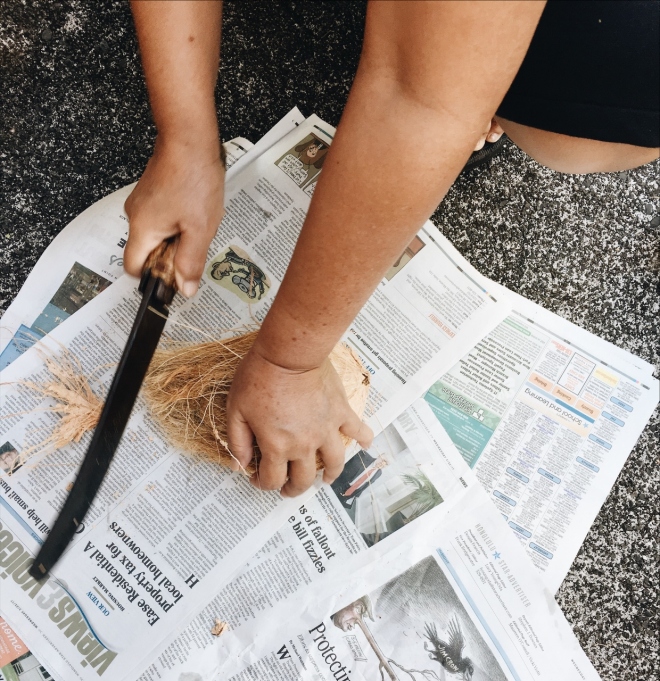 Grab your machete that’s been in your family for over 40 years and cut off any husk that’s sticking off the end of the coconut, allowing you to peel away the rest of the husk (which takes some effort).

After most of the husk is peeled, it’s easy to spot the line that runs around the coconut, separating it into almost even halves. This line usually intersects with the three eyes of the coconut. Interestingly, you want to cut the coconut across the main line or width-wise, rather than along the line or lengh-wise. I wasn’t paying attention at this point, because I was more interested in taking photos, so I have no idea why you do this. 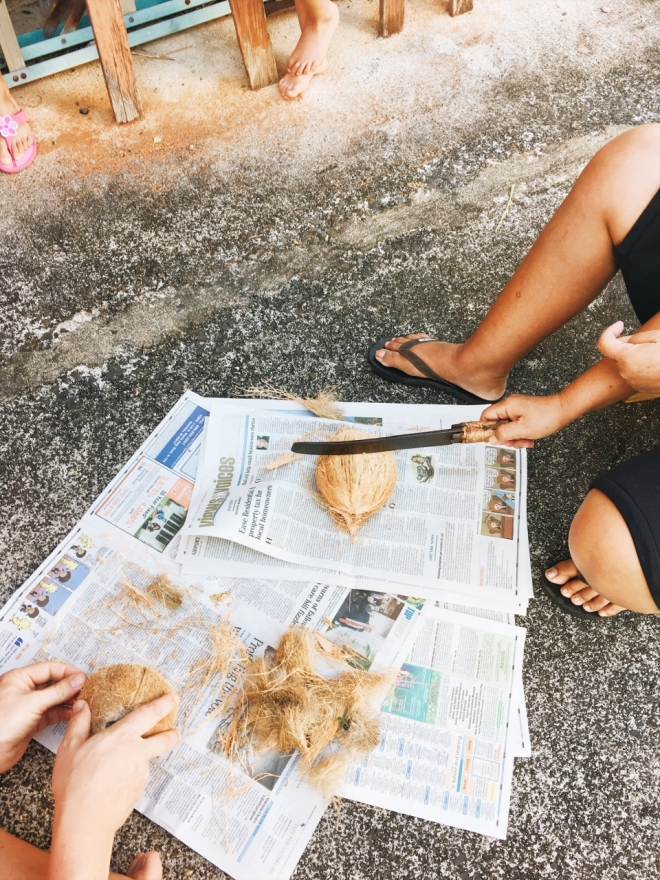 If you’re like Grandpa or Grandma, you can tell which of the eyes is the weakest, in which case, you get a screwdriver and poke it and drain the coconut with very little spillage. If you’re like the rest of us, you skip that part and go straight to the whacking. Let out an “ahhh!” while you do it for effect. Plus, it just feels like the right thing to do.

As soon as the coconut splits (it should be a clean split, although not completely cut through, if you’ve done it correctly), hold it over a bowl to catch the water, which you will later freeze into ice cubes and use to add a touch of the tropics to your nightly vodka gimlet. After the water is drained, give it another good whack and voila. Two perfect halves. 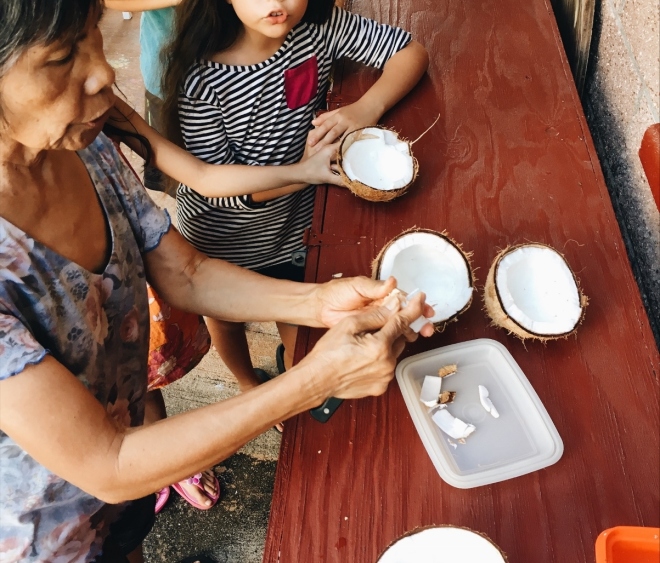 Ask your mom with arthritic hands to cut the coconut up into small pieces. #sorry!! #harderthanitlooks Eat immediately. Or use in one of your favorite desserts. May I suggest a contemporary version of the traditional Filipino halo halo (which Auntie made) or haupia sweet potato pie (which Auntie also made), or use as a topping for yogurt (which I did do every day).

Finally, take a bunch of pictures of your freshly opened coconut because have you ever seen anything so magnificently white?

I love anything and everything coconut-related. Except maybe shaved ice, which tastes more like suntan lotion than coconut. But my favorite is a young-almost-mature coconut, freshly cut, preferably by a loved one, making it all the more delicious.

2 thoughts on “How to Open a Coconut (Hawaiian Style)”