I was not ready to let summer go, so although September is a lovely enough month, I did not welcome it with arms wide open. Yes, it WAS nice in some ways to get back into a routine and to be making a bit more money (back to school means back to work for me), but I’d rather be poolside in the sun. 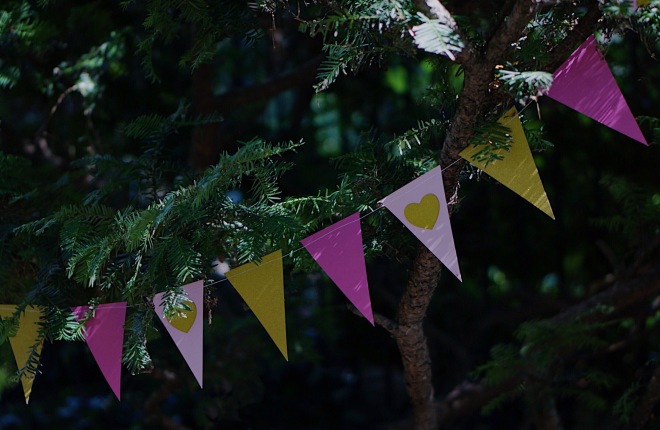 1)  Our littlest turned seven this month (insert a million sobbing emojis). She wanted a few friends and their families to come over for a barbecue, so we borrowed a cornhole game and I bought a ladderball game and we grilled hamburgers and hot dogs and ate so much artichoke dip and chatted and the weather was perfect and it was just such a great day.

2)  She asked for a vanilla cake with chocolate frosting. It came out….okay…somewhat dry (this did not stop me from eating cake for the next four days, however). I have to say that when it comes to yellow cake (which I know is not vanilla cake but it’s the same in that it’s basic), I do love a good boxed Betty Crocker cake! But I haven’t made one in years and couldn’t bring myself to make one this time.

3)  I finally made it to the Asian market (although after the fact, realized it was not THEE Asian market, but I’ll get there) after four years of living here and saying I need to get to the Asian market. I bought every brand of pot sticker, a handful of random spicy sauces (black bean, garlic, etc.) and several frozen shredded coconut packages, but was somewhat frightened by the tightly-wrapped plastic vegetables, so I didn’t get any of those.

I also got a stack of pot sticker wrappers, but I haven’t used them yet, because they intimidate me, even though all I need to do is throw some pork and onions in there and fry them up. Now I fear they’ve expired, but I can’t bring myself to check. 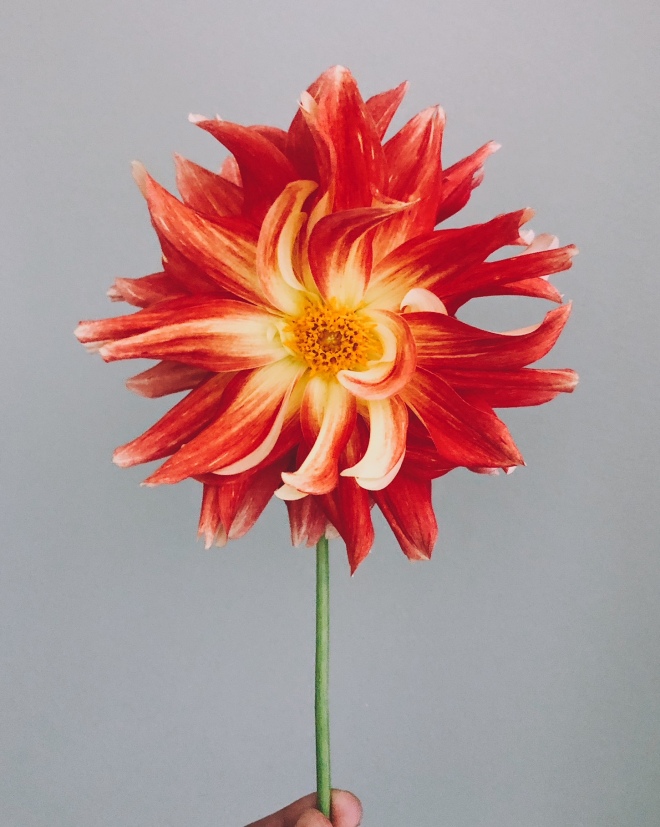 4)  This gorgeous thing bloomed in my front yard. It was the one and only dahlia bloom so far on that particular plant, and I’m not sure I’ll get another. I texted Nancy and Julia for the name and Nancy said it’s called “Punkin Spice,” but our seven-year-old calls it Dragon’s Fire. Either way, it’s a perfect Fall flower, yes?

5)  I read two books this month. I can’t remember the first one and I’m too lazy to walk up one flight of stairs to my bedroom to look in my book journal (You don’t have a book journal!?).

The other was our October book group book, “An American Marriage” by Tayari Jones. It was refreshing in that it’s not something I would have picked up on my own – the journey of a black couple in Georgia after a turn of events in the justice system forces their separation. Yet it was surprisingly up my alley – a little dark, good character development, really great writing and not predictable. Highly recommend. 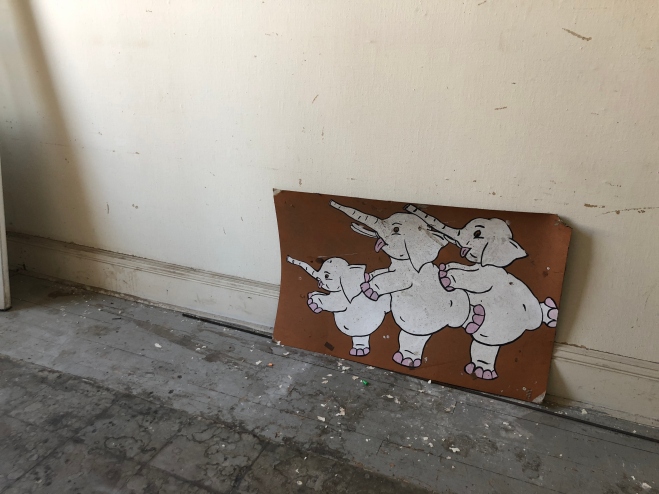 6)  My office is in this massive historic building along the lake. The third and forth floors are in a bit of disrepair, but we do store things up there and every once in a while I stop and peek around corners. You never know what you’ll find, like this gem. Wow.

7)  My mom texted me this picture of her night-blooming Cereus, a plant that blossoms only at night and lasts only one day. I remember a movie (back in the 80s?) about such a plant, where this man invited everyone to a garden party at night to see such a bloom (wait, was it Dennis the Menace? That would be 90s?).

Anyway, there was a commotion and everyone turned toward it and missed the bloom. It was supposed to be a funny scene, but I was horrified (hahahaha, I’m such a loser, I never think anything like that is funny because I always feel bad for the person).

8)  My girlfriend Renee couldn’t be in two places at once so she entrusted me with taking photos of her son at the country club for his first homecoming. Watching all those kids filing into the club….they were so sweet and awkward and raw. Our oldest daughter isn’t that far off from that stage, I teared up thinking about it.

She ordered the boutonniere and wrist corsage at Detroit Abloom and they were soooo pretty.

9) Speaking of Detroit Abloom, I was invited to a pop-up dinner in the hoop house. One of the organizers found the flower farm through my Instagram account, thus I was invited to attend and did so happily. It was their first one – a first for the hoop house and also for Commonflower Gatherings, the pop-up organization, and it turned out beautifully.

The gals who came were mostly bloggers and entrepreneurs and also a bit younger than I, so I felt slightly out of place (yes I blog, but I wouldn’t say I’m a bloggER), but I loved their energy and positivity. If you live in the area, they are planning many more pop-ups, look them up and go to one!

10)  Let me just take a moment here to say I’ve been missing San Francisco a lot lately. I miss my runs in the Presidio, I miss perfectly spiced Asian noodles, I miss the band, I miss my book group (no offense to my current book group, which I LOVE), I miss people who know the very core of me. Also, I miss composting!

I’m not sure what is bringing about all this nostalgia. Maybe the change of weather. Maybe it’s this rare double rainbow over Lake St. Clair that showed up at the beginning of the month (okay, no. But it felt like a good spot for it). I could go on and on and wax poetic about the meaning of the word home until your eyes hurt from rolling them, but I’ll just say I’ve been missing my San Francisco.

11)  OR. Maybe it’s because our lilac tree died last week in a storm and I am beyond! Insert another million sobbing emojis (also, do your kids eliminate the E on emoji and just say moji? Mine do).

Not the best pic of it, but here she is last Spring.

I knew that tree was not long for this world, but I assumed another two years at least. I keep an eye on it when it snows to make sure it doesn’t get too weighted down, but never did I think a heavy rainstorm would knock it down. Its old trunk was twisty and interesting and in the Spring, it was one of the first things to bloom. So sad.

12) I saw a falcon or a hawk in my neighbor’s yard the other day eating a squirrel. So that. I was in my car and stopped to take a photo and scared it (I’m sorry!). I want to say it was a falcon because it was speckled (as you can clearly see in the photo I took of it – ha!) and looks more like a Googled falcon than a Googled hawk, but I know nothing. It flew a couple feet with the squirrel, then dropped it and perched on a tree and watched me with annoyance (I’m sorry! Go get another squirrel, there are plenty!).

Also. I cut enough apples for two pies yesterday, so it’s definitely Fall and no, you’re not invited over when they’re done because I’m eating them both myself because OUCH, my wrist still hurts so much. Okay, maybe one slice.