A couple Fridays ago when the girls were with a sitter, I drove to Corktown, Detroit’s oldest neighborhood (though, as Wikipedia points out, the actual city of Detroit is much older) located on the west side of the city. Originally occupied by Irish immigrants in the mid 1800s (most from County Cork, hence the name). At the end of the decade, Maltese immigrants came through, and in the early 1900s, Mexicans.

This up-and-coming neighborhood (according to various news articles I’ve read, most recently in The New York Magazine’s “Post-Post Apocalyptic Detroit”) is a hot spot for cool restaurants (including the always-crowded Slows Bar BQ), clubs, retail stores and yes, a coffee shop in the form of Astro Coffee, which opened three summers ago. Astro Coffee lies at the edge of Corktown, kitty-corner from the abandoned Michign Central Station.

The 2100 block of Michigan Avenue (Astro Coffee is housed in the green building).

I was really excited to finally visit Astro Coffee. We tried as a family to pop in one Saturday, but a sign on the door told us they were closed for a week-long holiday. This particular stretch of Michigan Avenue was quite busy with business lunchers and some families at Slows and Mercury Bar across the street. As I walked by the front window, I noticed the Ritual Coffee (from San Francisco) sign, which made me both happy and unsure (I have mixed feelings about Ritual. It’s a long story).

Inside, there were some pastry and cookie selections up front, with daily sandwiches (which the flies seemed to enjoy, even with the mesh domes meant to keep them out) along the side counter. I ordered a cappuccino and a sage shortbread cookie.

The clientele was what one would expect. There was the usual one or two people on laptops at the back communal table, a couple regulars at the bar area, a few business folks ordering cups to go. I sat at the counter facing the street. The guy behind me was talking to a friend about such and such picking up his new TV show (yawn) and the older couple next to them were tourists (I’m guessing. They were speaking French).

So what about the coffee? you ask. Delicious! It was full-bodied, and bitter the right way. The crema was thick and creamy and I can’t remember, but I don’t think I needed sugar. The cookie was served on a pretty little vintage plate. It was quite sweet and the sage tasted suspiciously like rosemary, but hey. I was there for the coffee.

Last weekend, the whole family piled into the car for a ride to Detroit. I’m still trying to get my bearings, so my husband took us the long way into town – Lake Shore to Jefferson, and then we drove around downtown and up Woodward to Midtown. I’d read a few things about Great Lakes Coffee Roasting Company and wanted to see if it would live up to the hype, so we stopped for a snack and of course, a  cup of coffee.

My husband ordered a pour-over and I wavered between a cappuccino and a macchiato before choosing the later. I got an almond croissant, the girls got blueberry muffins and my husband had some kind of apple pastry (I think).

The cafe sits on a corner near the DIA/Detroit Institute of Arts Museum. It’s a beautiful space, with exposed brick walls, wooden floors and ceilings and industrial accents everywhere. There is bar seating at the counter and the main room has several community tables and some smaller tables and chairs off to the side.  There was also outdoor seating, as well as bar stool seating along the main window inside. The people there were pretty hipster, but not to the point of being annoying. Quite. The staff was also hipster, but not pretentious, which was refreshing.

My husband loved his coffee. He said it was rich and thick, like you could almost chew it. Mine was excellent as well, although next time I’ll get the cappuccino. The macchiato was perfectly made, but I love steamed milk when it’s done right and I’m sure this place would do it right. The pastries were okay. Nothing to write home about. But I didn’t mind, as we were there for the coffee, anyway.

Typically, this cafe isn’t the best place to bring kids, but because it was a Sunday afternoon, they didn’t have loud music playing (which I’m told they sometimes do) or too much of a crowd (which I’m told they often have).  Unfortunately it’s too far from home to be a regular hangout for me, but we will definitely be back. 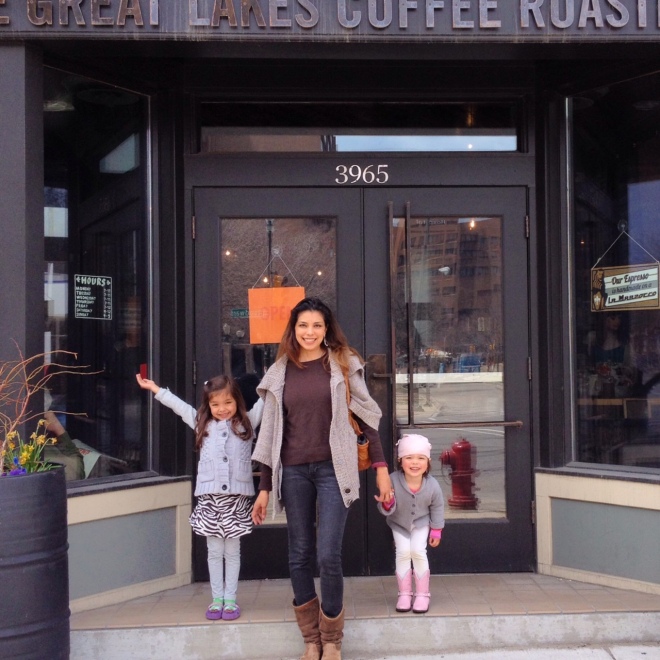