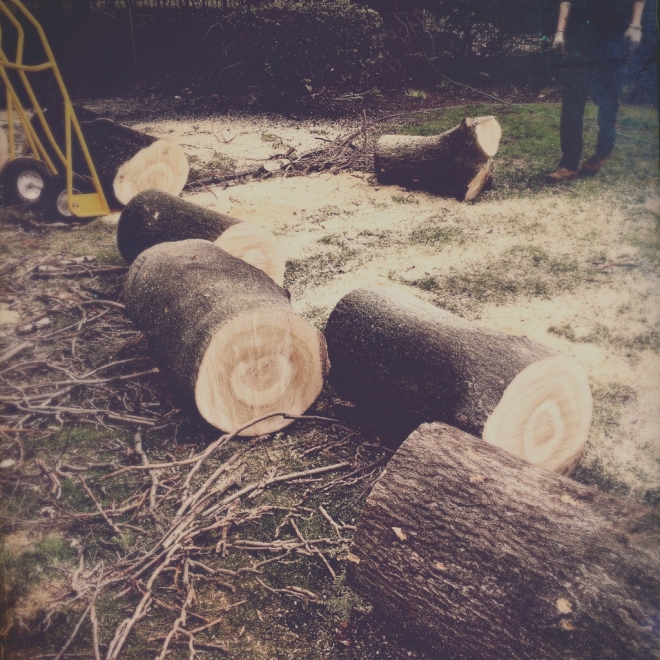 Last summer we had weeds. Not just any weeds but weeds that I eventually learned were coming from our super tall ailanthus tree. I did some research and sure enough, this tree is considered an invasive species in many states, including Michigan. One neglected weed grew to over six feet tall within a matter of weeks! Our neighbor pointed it out to me and it was promptly (although not without some difficulty) pulled up by me.

The tree originates from China and was introduced to the U.S. in the late 1700s. It is called the “Tree of Heaven,” probably for the tall heights it can reach, but when you google it, other common names are “Tree from Hell” and “wonder-weed.”

One interesting tidbit that I got from the Detroit Tree of Heaven Woodshop (where I also got the above image), an organization that makes creates art/items out of ailanthus wood, is that these trees started popping up in post-industrial Detroit when home became abandoned. They say “the quantity and height of Tree of Heaven specimen functions as a signifier for how long a place might have been abandoned.”

I would have loved to chop it down last year, but after receiving quotes from several companies, realized it was something we were going to have to save up for. It was first on my gardening to-do list this year.

Our backyard doesn’t allow for larger equipment to come in, so the company we used had one guy climb and cut the tree, and then a bunch of other guys on the ground helped guide him and move out the debris. Large pieces came down with a series of ropes (vs. throwing them down on the ground, which did happen with smaller branches).

Considering what a huge tree it was, they were quite fast and efficient.

The stump was ground with a machine, leaving us with a huge pile of wood chips, which I’ve been dispersing around the garden

I was thrilled to say goodbye to the tree. We now have a bit more light and hopefully, a lot less weeds this summer.

Alas, our next door neighbor has an ailanthus tree in their yard and you can be sure that I will be keeping my eye out on that side of the yard to make sure it doesn’t start invading our property as well! Happy gardening.