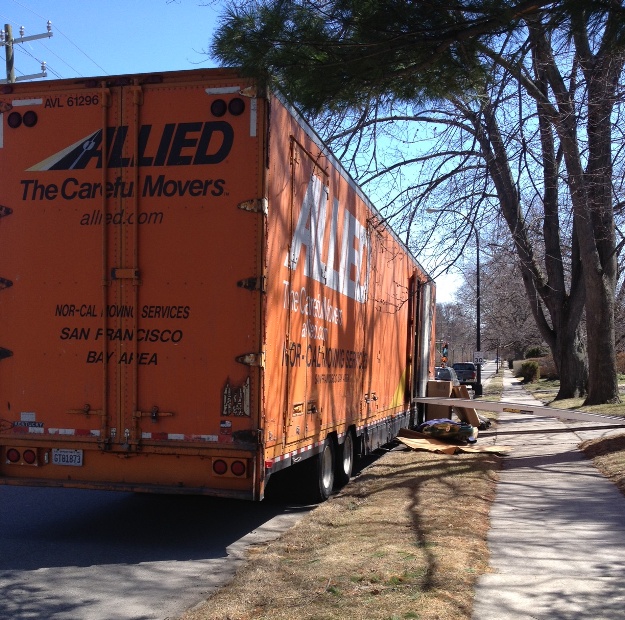 Friday was moving day. A big, bright orange van with the words, “San Francisco Bay Area” pulled up in front of the apartment a little after 8:30 in the morning. It took them all day to unload (I think they left at 5:30pm-ish).

My husband said the movers (the same crew moved us out of our SF place) kept commenting on how heavy the boxes were. “In my 35 years on the job, never have I…” and so forth. I did most of the packing. Whoops. But absolutely nothing broke. Except when I dropped part of the espresso machine as I was taking it out of the box. Yeah, well.

The first time I walked through the apartment, I was underwhelmed. No closet in the second bedroom (unless you call a 6-inch deep x 4-foot wide space a closet) and a somewhat similar “closet” in the “master” bedroom. The kitchen was tinier than I thought (and most of the counter space was taken up by a behemoth microwave from the ’80s). And there were dead flies all over the attic (which made the baby cry and want to go home). 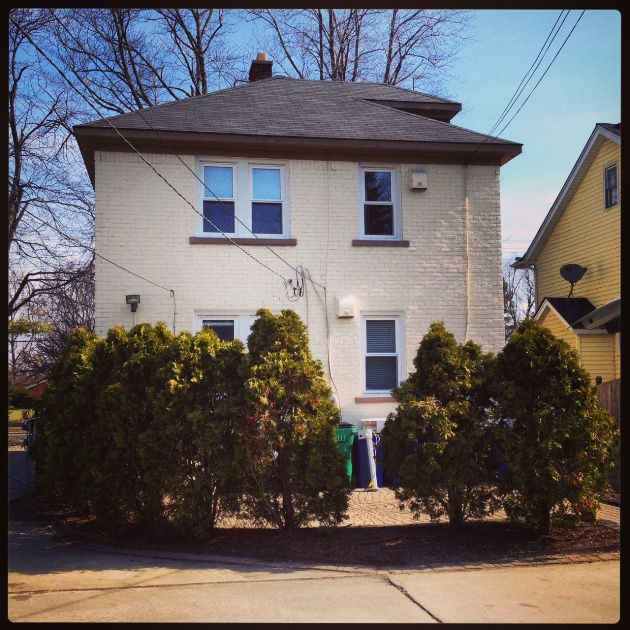 Looking at the apartment from the backyard. Second floor.

After my husband arrived (five days after I did), he and Sam the Labrador slept at the apartment, while the girls and I continued to stay with his mom (so much easier to be in a furnished home with a stocked fridge, especially with little ones).

The girls and I still haven’t moved in officially. The fridge and the washing machine are both on the fritz (to be fixed tomorrow). Not to mention the boxes everywhere. But I’m already growing fond of the place. I managed to fit all my cooking stuff (meaning the stuff I didn’t put in storage), save a couple bulky items (slow cooker, mixer), into the tiny kitchen. We figured out solutions for the clothes situation and the attic is a super play area for the girls (and it has air conditioning!).

Me and Sam in the backyard on moving day.

And the backyard. Oh my gosh. Having the girls be able to go downstairs on their own (carpeted, not scary stairwell inside of the house) is a million times better than our situation in San Francisco. And I can see them from the kitchen window. Dream come true.

A lot of our things we allocated for the apartment didn’t fit into the small space. And I kind of love that.  I loved putting books, artwork, clothes, dishes, back into boxes and labeling them “storage.” I loved the process of “no, we don’t need that.” I feel clean. And I feel like, yes, we can move from a 1700-square foot home to an 800-square foot apartment and live to tell about it. Very excited to move in (tomorrow?) and really get this adventure started. 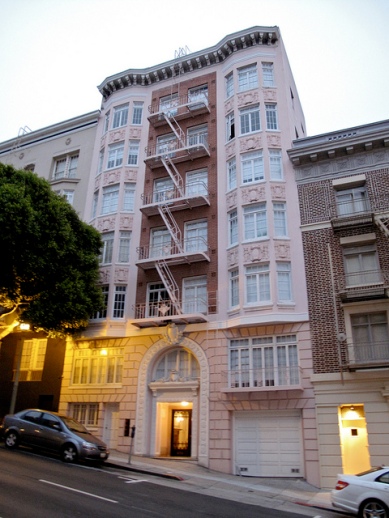 Photo Credit: Anomalous_A at Flickr (Click to view his full photostream.)  Number 56 is on the right (with the window open), second floor from the top.

I moved to San Francisco at the end of 1996. I had been living in Reno, Nevada for two years and was itching to get out of its eerie strangeness (if you’ve ever been for an extended amount of time, you know what I’m talking about). I worked as Publishing Coordinator for Addi Galleries’ publishing division (limited edition fine art prints). When they announced that a new location (now occupied by the Martin Lawrence Gallery) was being built in Union Square, I jumped at the chance to relocate as the new gallery’s Administrative Director (for a cool $13 per hour).

In one extended weekend, I set out to find my new apartment. My whirlwind search was a success (reminder there was no Craigslist yet); the rental agreement 820 Jones Street, #56 was signed at the end of my trip.

I believe the rent was $875, which covered 420 square feet of studio space, including a separate-ish kitchen, huge walk-in closet (which some tenants used as an office) and tiny bathroom. The basement housed a coin washer and dryer, and also the garbage bins, which more often than not had huge roaches scurrying about. (I have a phobia of roaches. No, seriously. Have you ever woken up to find yourself squishing a flying cockroach just inches from your mouth? Didn’t think so.)

The ad in the paper (the paper!) said the apartment was in Nob Hill, but some would say it was really in the Tenderloin. I think technically it’s Lower Nob Hill, (“Tendernob” came into use in the early 2000s, a term I’ve never liked nor used), but I always told people I lived in Union Square, as it was a short three and a half block walk to the actual Square. 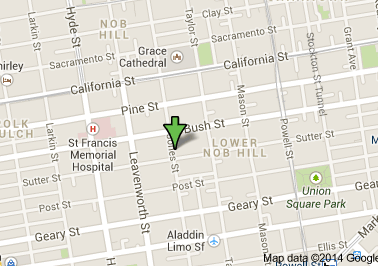 I had the corner unit, so I could see across the street to Sutter. Back then, the Commodore Hotel (now a residence hall for the Academy of Art) ruled the block, with its popular Red Room nightclub (all red decor, as one would guess). 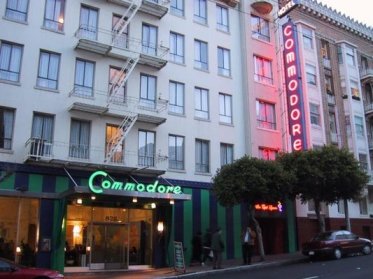 Next door to the Commodore was the Titanic Cafe (now the Cafe Bean), a small diner that served breakfast and lunch only. Sometimes on weekend mornings I would sit at the bar and treat myself to a their buttermilk griddlecakes for $5.75. It was the first time I saw the sign, “Tipping is not a city in China”.

My first few days in the apartment were spent trying to keep warm (one of the windows didn’t shut and my radiator was jenky) and to function on very little sleep. I didn’t yet have a futon; I slept on a bed made of my bathrobe and towels, and used my comforter for covering (why did no one tell me about heating blankets!? I would have bought one in two seconds!). I also didn’t have curtains for I can’t remember how long.

I arrived during the week between Christmas and New Years, so the city was even louder than usual and had a weird energy that made me uneasy. On New Year’s Eve, the the town went wild with people yelling, honking car horns and throwing calendars out windows (a tradition that has since stopped). 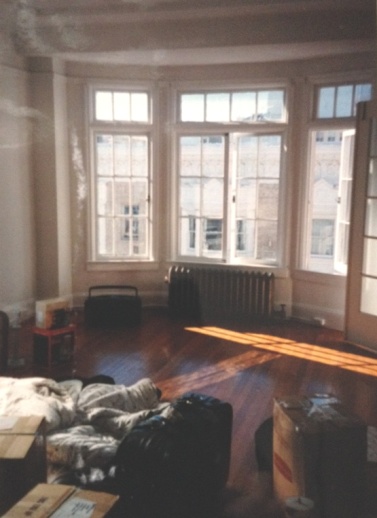 Soon I was sleeping through the 5am garbage collections, the wailing fire engine and ambulance sirens and the late-night revelers (whose sidewalk voices sounded like they were in the apartment). I looked forward to watching the transgender prostitutes walk the streets on weekends, getting into cars with their “dates” and arguing about who was on who’s turf. (This weekend ritual only lasted a year or so. I faintly remember some movement to “clean up” the area, which pushed the girls from Jones Street to Polk.) 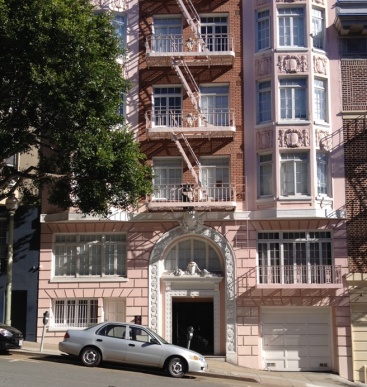 I drove by it the other day on the way to get my hair cut. I pulled over and got out to take a couple photos and say goodbye. I had forgotten it was painted my favorite shade of pink – a realization that made me suddenly so happy. I smiled all the way back to my car.