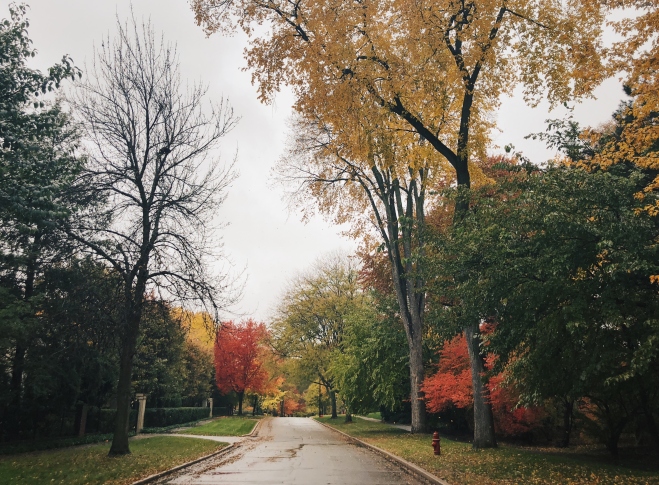 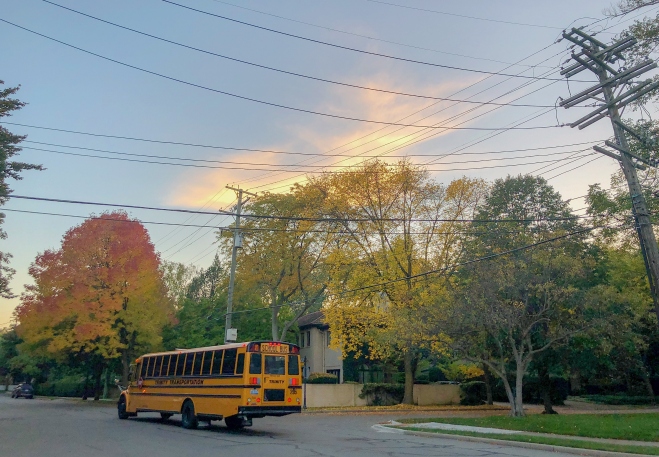 1) Fall colors are KILLING it this year. I haven’t had the chance to capture the colors on camera (and would pictures really do the colors justice?), but the ombres are beyond and the spectrum of bolds and brights this year are fantastic. I’m sure the weather patterns have something to do with it and if I weren’t so lazy I would Google it, which I will at some point.

2) Halloween night weather was the best it’s been since we moved. No rain, snow or sleet! Temperatures were in the low 50s, high 40s.

A friend of ours puts up elaborate Halloween decorations every year and kids from the neighborhood and beyond come to check them out. A lot of the creatures have movable parts – a spider that jumps and a giant pumpkin monster that lunges towards you as you pass by. He makes all these creatures himself, which is very impressive!

3) It was our first time invited to an annual Grosse Pointe Halloween party (woo-hoo, thank you PC!) hosted by two couples who live across the street from each other. I am terrible at estimating numbers, but have been told it is attended by 100-200 people.

This year’s theme was Studio 54 and at first I was not keen at dressing up at all (Keen? I don’t even like that word. It just came out), but after looking up some 70s inspiration outfits, I realized I had some good options already in my closet.

My husband looked Ah-MAZE-ing in his sparkly silver shirt and matching platform shoes. I’m surprised he didn’t completely fall on his face, which he almost did about five times, once in the porta-potty (no, I wasn’t there!). The party was so much fun, loved seeing all the costumes and hanging out with friends and dancing.

(On a side note, you know you are at a great party when the 20-year-olds start throwing rib bones back on the buffet table? WTF)

4)  I turned 46 this month. Which was actually easier than turning 45. I could write ten pages as to why, but I’ll spare you. The mister and I celebrated with dinner downtown at the Caucus Club. Atmosphere was okay, but food was really, really good!

5)  I stopped taking Tamoxifen on my birthday. The drug that supposedly has been keeping cancer at bay for the last five years. It is both a relief and terrifying. I definitely was feeling the effects of the drug in terms of body aches and dry skin and other random things.

Ever since I’ve been off of it, though, I have been extremely tired, like second trimester slap-in-the-face tired, which I am hoping has something to do with the fact that I’ve had a cold for the last three weeks vs. a drug withdrawal syndrome because it really sucks.

6)  Went to my first Michigan football game! Thanks to an invite from my husband’s Uncle, who has great season tickets. All morning there were thunderstorms and even when we got to the parking lot it was raining and the game got delayed a bit because of lightning, but the clouds parted just in time for us to some tailgating and the game weather was absolutely beautiful. It was a homecoming game, so fans were extra festive and thus the atmosphere was too. 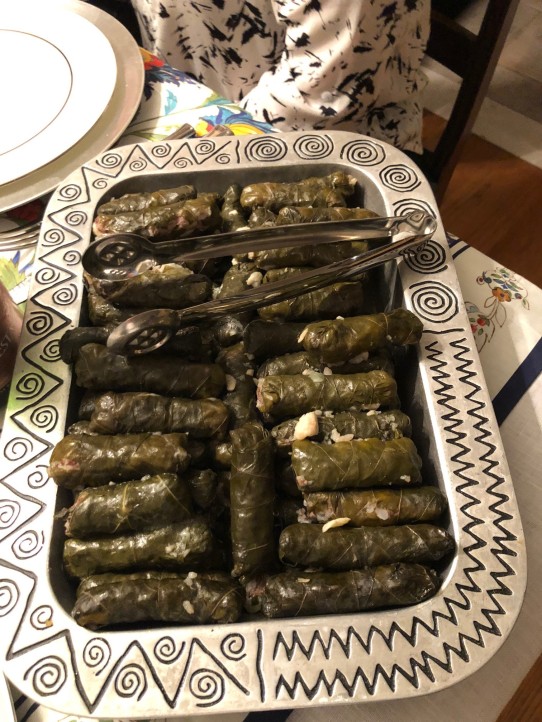 7)  We went to a friends’ house for dinner. She is Lebanese (or part Lebanese? Sorry, I don’t remember!) and made a bunch of ethnic dishes like dolmas, lamb and kibbeh, which OMG if you don’t know (which I did not), is Raw. Lamb. Insert bulging eye emoji.

I’ve had beef carpaccio many times and have watched my Filipino relatives eat chunks of marinated raw beef (I mean), but did not realize people ate raw lamb (although what’s the difference, I don’t know).

Anyhoo…..in the spirit of Julia Child, who taught me a bit about what it means to be a good host and a good guest…I tried it. The ground lamb is mixed with a bunch of spices, and you eat it with raw white onion, olive oil and pita bread. When I went to my happy place in my head and blocked out that it was raw lamb, it was REALLY DANG GOOD. It still kind of grosses me out to think about, but I would eat it again. But only if she makes it.

8)  I had another meal cooked for me by the dad (who was visiting from China) of one of the exchange students at our school. He made two of my favorites – ma po tofu and sautéed shrimp that you shell and dip in super spicy sauce.

He also boiled a WHOLE CHICKEN (which somehow was so much gaggier than the raw lamb), which was then shredded to be eaten with super spicy sauce. And a version of kung pao chicken. And baked chicken wings with MSG. Dipped in (surprise) super spicy sauce. It was such a treat for me, as we don’t have great Asian food around here! 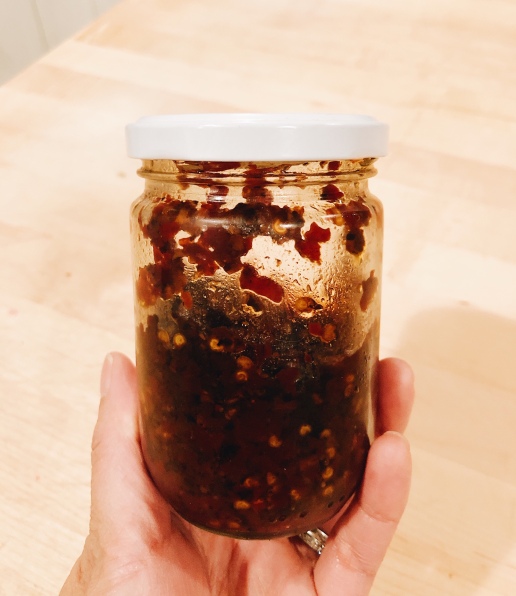 9)  One of the super spicy sauces we dipped our food in was black bean chili sauce my mom sent me for my birthday from my favorite Chinese restaurant in Hawaii called Little Village Noodle House. I’d gifted one of my precious jars (she sent several because she loves me) to said exchange student because I’d heard he couldn’t find a suitable spicy sauce. Mission accomplished.

10) Oh, I forgot to tell you about our Dahlia Festival that took place at the end of September. I say “our” but I have been so far removed from The Garden this year, but I still think of it as possessive, because I do hope and plan to be more involved as soon as I am able (which means actively carving out time and committing to it).

Tom made this very cool contraption called a….flower loom? I have no idea, but you take flowers and weave them in and out of the loom as you feel so moved. It felt very poetic. I’m going to ask Tom to make one for me (I will pay you, obvs!), I think the kids would enjoy working on it next season. 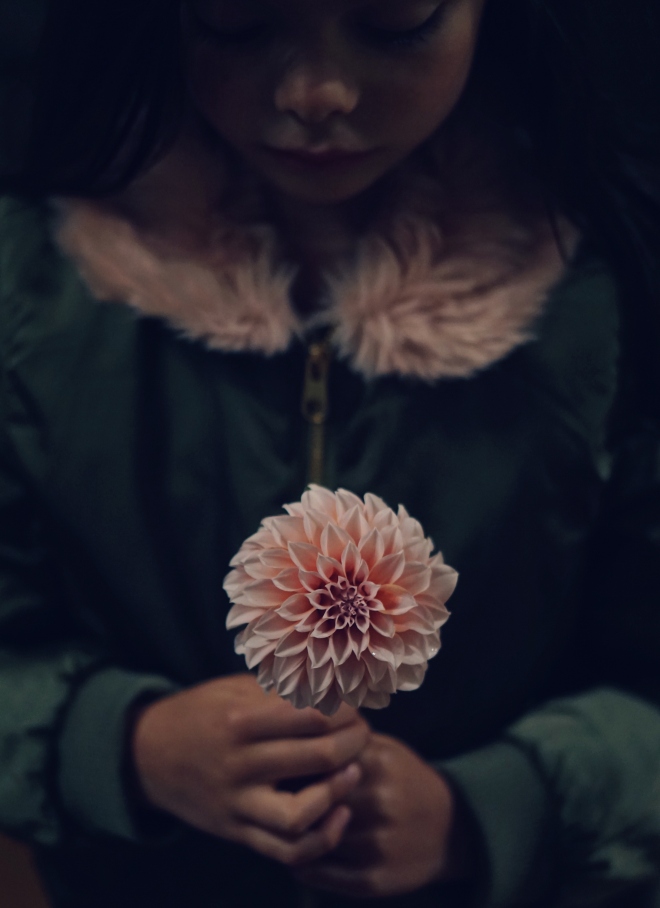 11) Speaking of dahlias, my plants are still hanging on in spite of the near frost we had last week! It’s a miracle! Dahlias die after the first hard frost, but I guess that didn’t happen (one night it was supposed to get down to 32) because my plants show no signs of turning black yet, while just a few miles away at Detroit Abloom, the leaves are blackened and tubers are ready to be dug up for storage.

This particular flower wasn’t from my garden, but gifted to me by Nancy in my birthday bouquet. The petals are insane, SO beautiful in person, as you can imagine. Julia thinks it is a Peaches N Cream, which was a new variety for them this year. 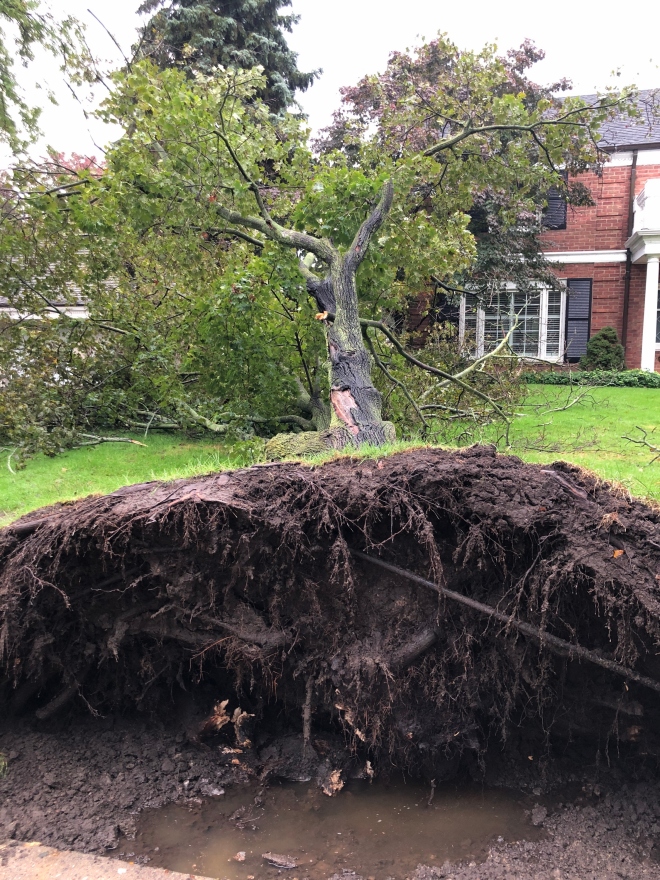 12)  We weren’t the only ones to lose a tree in the neighborhood in the last few weeks (i.e. our lilac tree as referenced in last month’s list). As we were driving to school one morning, my daughter spotted this downed tree. I had to get out a snap a pic. Whoa. Luckily, the pictured house didn’t get hit by it.

That’s October! We are zooming on in to the holidays, I can’t even think about it or I will pass out. Wishes for a happy November!